Features exposed lead tips for controlled expansion and hard-hitting terminal performance. Our pioneering secant ogive design is one of the most ballistically efficient profiles ever developed. Our InterLock design features a raised ring inside the jacket that is embedded in the bullet’s core that keeps the core and jacket locked together during expansion to retain mass and energy. 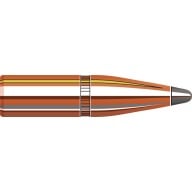 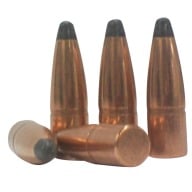 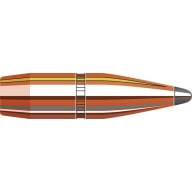 By Owen P. on Aug 29, 2018
I use this bullet in my Ruger Single shot. It gives 1.25 groups at 200 yards with XX grains of IMR4831. This bullet works best in this rifle, half the size group of other bullets. Performs flawlessly at distance. Not really designed for close up shots. My 30/30 takes care of those.

Very accurate, but not a great penetrator

By Gary G. on Feb 03, 2013
This bullet over 58 grains of H4831 shoots so well in my 1950-vintage M70 that it's scary. Based on the buck I shot with it last year, however, it's not the best bullet for close-in shots. I hit the buck half-way up, broadside, just behind the shoulder at about 40 yards. He swapped ends and tore off back the way he came from. I tracked him as best as I could in the pouring rain for about 100 yards, but found no blood. I assumed that somehow I had missed the offhand shot. Later, I decided to check for sign again where the deer had been standing and found a clump of hair about 10 yards behind the spot. I followed his trail again and found him floating in a little pool of water about 50 yards from the spot I had previously given up at. He was totally trashed inside, but due to the high hit and no exit wound, there was no blood trail at all. Every other deer I've hit at similar ranges with other bullets has produced an exit wound. I recovered the bullet floating around in the soup in his chest cavity. The base was intact and mushroomed out nicely, but most of the core was gone. Excellent performance, except for the lack of an exit wound.