Graf's plated bullets begin as a swaged lead core. The swaged lead cores are tumbled in an electrically charged bath containing high-grade copper ingots. The copper clings to the lead and the longer the bullets remain in the bath, the thicker the plating.  The bullets are plated to the correct size and then taken out of the bath. This is not loaded ammunition. 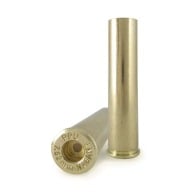 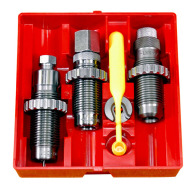 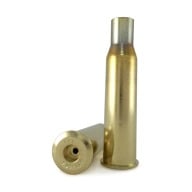 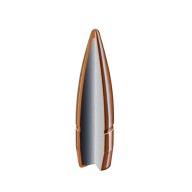 By Ryan J. on Mar 19, 2021
Since my normal soft point carbine bullets were out of stock, I've been loading these in reduced rifle loads over XXgr Unique for low-recoil youth loads and short range varmints in .30-06, .308 and .300 Savage. They don't feed from magazine well in the M99 .300, but work in the two bolt guns. Good accuracy, neat holes in targets, and awesome terminal effect on varmint critters.

By Matthew B. on Aug 15, 2020
Bullet's were very accurate out of my nagant revolver.

excellent for reloading for the nagant

By Joel H. on May 16, 2020
Been reloading for my 1922 for a few years. These are better than the original russian surplus and shoot very well over trail boss. Kind of hard to reload for the round but it is a lot of fun and these shoot great with no fouling.

By Stephen J. on Apr 26, 2020
I chose these exclusive bullets to reload for the M95 Nagant Revolver and really it was a no-brainer. Can't beat 'em for the money and performance when tucked in PPU brass and shot out of my 1944 dated pistol! Thank you Graf's for offering this...will be buying more soon.

By Edward D. on Oct 14, 2019
Bullets for the Nagant are hard to find, but these were available from Graf. Very happy that I found them. Quality bullets at a very good price with delivery exceptionally fast!!!

By Steven W. on Aug 28, 2019
These will allow me to reload original type Nagant cases for first time allowing it to function as a gas seal design. Also I plan to use in other .32 caliber revolvers.

By Paul F. on Aug 01, 2019
Am glad I found a bullet that worked in this revolver; I finally have a chance to use it.
I too trimmed the PPU brass back to 1.44 inches.
x grains of Bullseye worked great; x.x grains of HP-38 works fine too.
Paul E. Fellows

By Randall N. on May 03, 2019
I couldn't get an accurate load after years of trying, I thought mt pistol was just that way. Here's what I did, take PPU brass and trim it back to 1.44" so that it sits flush with the cylinder. It looks super cool and you can fill the case with more Trail Boss or whatever. I was blown away by accuracy 2 inch groups at 20 yards. It has really changed how I view the gun.

Outstanding bullet for the 1895 Nagant revolver

By Robert J. S. on Feb 04, 2019
This bullet is ideal for the Nagant revolver. It seats well into the case and allows a good crimp to be applied. There is no fouling in the forcing cone nor the barrel. The accuracy is very good and the bullets strike at the point of aim.
I highly recommend this bullet for the Nagant and other .30 caliber revolvers.

By Adam G. on Dec 06, 2016
Reloaded some PPU brass that I had shot out of my 1895 nagant. This bullet with 3.5gr TrailBoss worked out great. 2 inch groups @ 15yds. Highly recommend if you're like me and want to reload 7.62x38R brass. I did everything the guy did in the link below except I chose these bullets.

My Black-Hawk loves this bullet!

By Steve D. on Nov 27, 2014
I purchased a Ruger Black-Hawk in 30 Carbine 15+ years ago and was never able to find a loading that shot better than good pattern! Until I loaded up some of Graf's "Nagant" 98g DEWC's. These consistently are shooting 1" groups at 25 yards!

For duplicating the factory reload only

By Michael E. on Jan 02, 2013
I bought 100 of these to make 7.62x38R loads based on reformed .32-20 cases, and discovered that they're really not the best choice for that application. These are really for recreating the factory load using either the Fiocchi cases or annealed fired cases. Problem is that there's no crimp groove, and the Lee die set needs a groove to secure the bullet. I was able to seat them just below the case mouth and do a roll crimp over the bullets, but that doesn't secure them against moving under recoil. Best choice for .32-20 based loads is a 110-115gr .312 lubed lead bullet with a crimp groove.